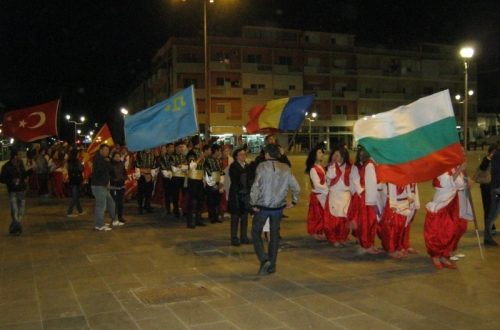 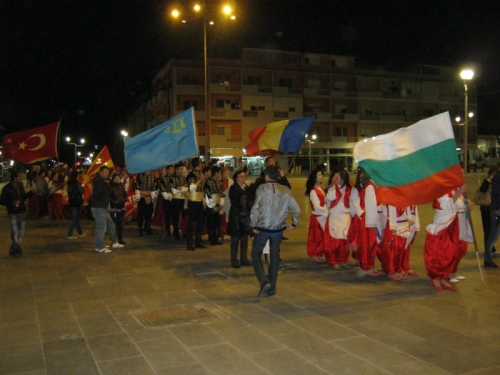 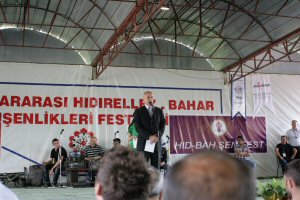 8th May Dancers at the Tatarli/Çalikli International Spring Folk Festival

The Organiser introducing the day’s events – including the Salonika Campaign Society!

The men and women of one troupe. Each troupe had a member hold a placard or flag throughout their performance. Makedonya Bahar means Macedonian Spring

The costumes were incredibly varied in both style and decoration.

This troupe danced what appeared to be a pre-marital women’s ritual, quite unlike the British hen-night shenanegans! Note the “bride” is heavily-veiled in the first picture but has had a red cloth added in the second. She sat on a chair throughout and played an entirely passive rôle. The other girls danced with what looked like candles on plates. I pitied the girls left to hold a flag or placard for anything up to 20 minutes with their arms outstretched. This one reads Jupa Turkish Culture, Art and Education Society, Novak. Novak is in the Jupa Municipality, a Turkish enclave in Macedonia, close to Lake Ochrid.

This was the most unusual costume of the day, in my opinion. The aprons were heavily decorated and trimmed with bobbles.

I think these were local children as they received resounding cheers when they appeared. Even so, their costumes are fantastic and must take ages to embroider.

Only one troupe did not have highly-decorated costumes.

This was one of the boy-meets-girl dances but in this one two boys chose the same girl and fought over her, encouraged by all the girls.

And still the varied costumes crossed the stage.

After four hours the group had to leave, leaving several more troupes to trip the light fantastic to the Muse of Dance, Terpsichore. This was one memorable day!

Powered by hidfestmakedonya | Designed by Shahpaz
© Copyright 2022, All Rights Reserved